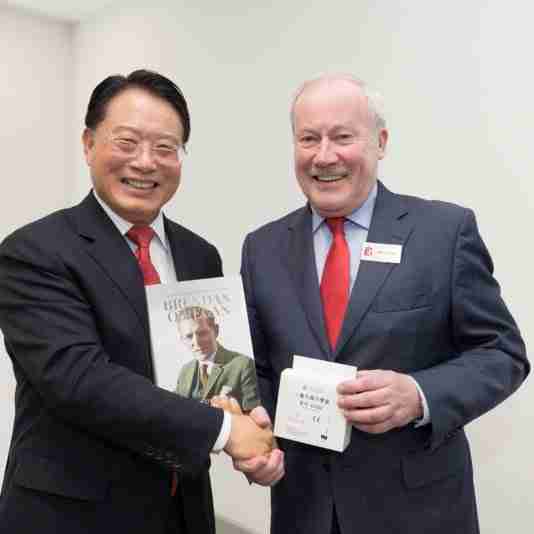 China’s economic development was inspired by the innovation and enterprise witnessed by delegations visiting Shannon, Director General of the United Nations Industrial Development Organization, LI Yong stated during his visit to Co Clare this week.

Mr Yong was the keynote speaker at a breakfast briefing held at EI Electronics’ Centre of Excellence in Thursday. Beginning, his thirty minute address, the former Vice-Minister of the Ministry of Finance of China noted, “Shannon Free Zone holds a special significance in the history of industrial development. It is a place that not only changed the development path of your own region here in Ireland, but many other regions around the world.

“As both Director General of the United Nations Industrial Development Organization (UNIDO) and a Chinese national, it is particularly poignant for me personally to be here, where a great turning point in global industrial development occurred, and indeed at a place that was a catalyst for change in my own country”.

He added, “The history of Shannon, UNIDO and the economic development of my home country, China, are tightly interconnected. Almost 40 years ago, UNIDO organized a training programme on Free Industrial Zones for a Chinese delegation here in Shannon”. Future Chinese President, Jiang Zemin was part of the group that came in 1980. “The lessons that this group brought back to China were invaluable and contributed greatly to the economic boom that followed for my country. It is truly inspirational that this small 2.5 square kilometre site on the edge of Europe has had such a huge influence around the globe”.

Recalling a previous meeting with the late Dr. Brendan O’Regan, the Director General admitted to being struck by his vision and innovation. “I came across a quote from Mr. O’ Regan which I found very telling. He once said that “the needs of the Third World what we now call the developing world are so great and growing at such a pace that we in Ireland cannot be content to rest on what is being achieved by these methods alone”. I think it says something about the spirit of the Irish people. Having spread his innovations around the world, helping to boost the economies of many countries in need, he was not content to rest, but knew that there was always more that could be done to help. Ireland has always worked with this spirit of determination in its international development aid work and has shown it will continue to do so into the future”.

The Director General graciously listened to case studies of three prolific innovative companies in the region that are part of the Shannon Free Zone’s special heritage. The CEO’s of Ei Electronics, Bolgers Engineering and Tekelec were honoured with this opportunity to share their story.

To mark the visit, EI Electronics CEO, Michael Guinee presented LI Yong with a book on the late Dr O’Regan and one of the company’s carbon monoxide alarms which has recently been introduced to the Chinese market.